The French-Italian border of Ventimiglia is a place full of contradictions. Since the closure of the border in the middle of june 2015 this place has been one of the symbols of violence that characterizes the EU immigration policy. Here we have seen police raids on the trains and in the stations stopping peolple on the basis of their skin colour, we have been witnesses of deportations that hundreds of migrants suffer daily, we have been put in custody by the police here and beyond the border.

Migrants were the first to respond to repression, occupying the rocks near the border and setting up a camp that during these months has become a space of resistance, complicity and struggle. After that moment Presidio No Border has promoted many initiatives and direct actions questioning the closure of the border, its logic and its consequences.

After a first unsuccessful eviction attempt, the intutions have opposed a low intensity strategy against this resistance, exercising a constant pressure on the field. The attack by police forces, Italian and French, have been carried out with the support of traffickers and the logistics provided by the Italian Red Cross, with the help of embedded journalists and politicians, united in the manipulation of the so-called “refugees emergency”.

The escalation of repression against people showing solidarity with migrants culminated in several episodes that we mention here. Our monitoring and counter-action against deportations across the high border at Ponte San Luigi have already costed us 18 charges for occupying, an arrest and 7 expulsion orders, without considering the many events of intimidation to which we are daily exposed to. These administrative measures have not been able to stop the self-organization process of migrants and people showing solidarity at the border.

After two months the Presidio Permanente No Border in Ventimiglia is still there and calls out to all networks, individuals and collectives that in recent months have mobilized in solidarity with migrants to relaunch a transnational convergence against borders, racism and the exploitation and militarization of territories.

From the transnational three days of the 24-25-26 July, we started a discussion about some important arguments about the meaning and direction of our struggle. If the Fortress Europe has now abandoned the humanitarian face with which it is used to self- represent and now shows all the violence of its colonial aspirations, the leadership and determination of the people traveling in recent weeks expresses the need to relaunch the struggle for freedom of movement for everybody. The mass border crossing attempts that we have seen in Ventimiglia and Calais, on the Greek islands and at the Macedonian border, as well as the thousands of people that every day (individually or in small groups) cross boundaries everywhere in Europe, make clear the unsustainability of European policies and raises the problem about what kind of contribution it is possible to give to this movement.

The multiplication of borders, the creation of dozens of refugee camps at the four corners of Europe, and the criminalization (or in a best-case scenario their reduction to objects) of migrants that we are witnessing require us to continue the great work of relationship and sharing of active solidarity practices. To keep on supporting the crossing of borders in an explicit manner and draw new geographies of freedom definitely is a part of the job that lies ahead of us, but no the only one.

Our support must be first a report about the real causes that generate migratory movements, about the consequences of the closure of the borders on people’s life and about the perpetrators of such a state of affairs. Thousands are dying drowned in the sea, suffocated in a truck or crushed by a runaway train, and this happens because it has been decided. Debt policies, dispossession of resources and exploitation of people in entire regions of the world set forth by governments and corporations are conscious choices made by those in power. The so-called global elites have their hands stained with blood, and their statements of condolence for the victims of human trafficking are sickening. Some of the representatives of the ruling class that today speculate on the escape of men and women from their countries of origin are the same criminals and murderers that do business on this movement, even supporting those authoritarian regimes from which only formally distance themselves. In front of their crocodile tears it is necessary to reaffirm their political responsibility and transform the pain for those who die into organized anger against them .

During the meeting we would like to develop an articulated reasoning, that bears in mind both the causes that generate migratory movements and the possibilities that open up in the territories in terms of struggle and response to the needs and exploitation that migrants live in places of departure and destination. It’s essential reflecting on how the militarization of territories, in Europe as well as in Africa and in the Middle East, has devastating effects on the lives of those who pass and those who live there, and on the dynamics of expropriation and exploitation that are cause and consequence of current strategy of capitalist system.

From these arguments, albeit generals and without the presumption to be exhaustive, we offer three workshops which may serve to impulse a broad and long-standing mobilization.

This new transnational assembly in Ventimiglia should be an opportunity to build more incisiveness at a political level. In order to do this it’s necessary that our reflections will be followed by mobilizations that can match up to the challenges we face.

In this context, it seems useful relaunching some of the mobilization proposals emerged until now (hoping to add other more proposals soon).

September 6th: Freedom without borders! Stop borders, stop prisons! Day of initiatives and actions against repression, for the construction of alternative geographies and solidarity.

September 15th: mobilization day for Kobane. It could be interesting to get in connection with the week of mobilization for the opening of a humanitarian channel for Kobane, trying to provide the basis for a solidarity meeting.

October 3rd: Two years after the sinking into the Strait of Siciliy when more than 400 people died, in our opinion is important to take up the proposal that comes from Lampedusa about the widespread screening of a documentary investigation into the events of that day and the construction of a debate over securitarian and military policies that followed. The point isn’t making another empty ritual of commemoration and mourning on that date that produces nothing more than an extemporaneous indignation, but it’s about getting in connection and finding space to think together and build practices able to sabotage European immigration policies from Lampedusa to Calais.

October 17th- 24th: to participate and extend the mobilization proposal launched by the Committees Sans Papier, making them the beginning of a process of transnational struggle against borders, racism, exploitation and militarization of the territories .

From Lampedusa to Calais, we are not going back! 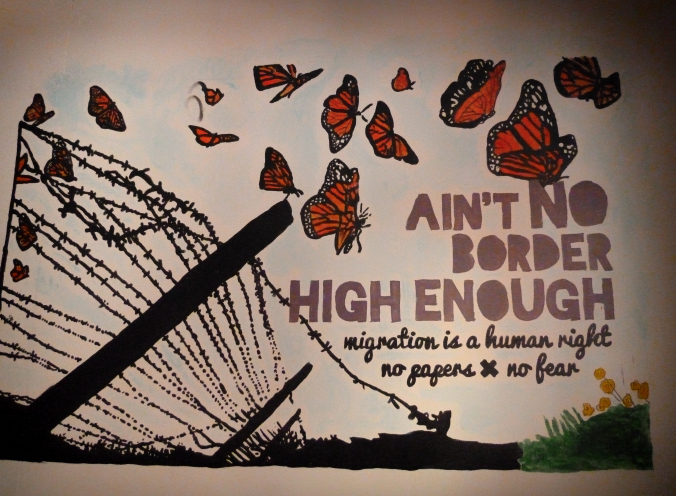